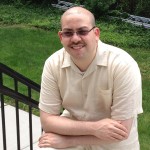 Edgard Torres Jr., was born and raised in Bronx, NY. In 1992 he gave his life to Christ in high school through a campus ministry known as Seekers Christian Fellowships. It was there that Edgard was discipled and learned about ministry. Through Seekers, Edgard became involved in missions, youth ministry, street evangelism and leading bible studies.

While still in high school Edgard was invited to Bethel Gospel Assembly where he eventually became an active member. There he became involved in the music ministry serving on the youth choir and the worship team. For a short time he serve on the leadership team ministering to the youth in Teen Church. Bethel Gospel Assembly, a missions minded church, was where Edgard had the opportunity to minister at various churches and youth groups. It was during his years of service under this ministry that God revealed the call to be a pastor.

Today, Edgard serves as the Ministry Coordinator for the Seekers Christian Fellowship where he organizes retreats. seminars, conferences, prayer meetings and participates in overseas missions trips. Edgard continues to serve as a pastor and worship leader at The Gathering with his wife Deborah.